The Devils in the Detail

gifted to simplyn2deep for all the many, many, many posts on One Million Words.

Kono knocked on Steve's open door, hissed, "Do something."

He looked up, but she was already stomping back to her office. And Danny was standing at the table, chewing Chin's head off.

Danny had been in a bad mood all morning. It had started with a terse text, saying he would meet Steve at the office. He knew he should've grown a pair, insisted on picking up Danny anyway. But it had been a long week, and he'd hoped it would blow over.

Now the team was paying the price.

Steve steeled himself, and got to his feet. It was nearly lunch time--maybe the offer of food would help.

"No. I don't have time for lunch, Steven. I have to do your expense reports, remember?" Danny jabbed a finger at his chest, then turned and stormed off to his office, slamming the door hard enough to rattle the glass.

Chin glanced at the door, back at Steve. Raised his eyebrows.

He stiffened his shoulders, walked over, and knocked.

He opened the office door, slipped inside. Closed the door behind him. "You, uh, want to talk about it?"

Danny kept his eyes fixed on his laptop. "No."

He made a guess. Grace was a teenager. Danny had been at practice with her last night. Clearly something had happened that required an AAR. "Did something happen with Grace?"

He lurched forward, buried his head in his hands. "Fuck."

Steve mentally searched the ever growing list of internet slang he was acquiring, thanks to Grace. No luck. "A03?"

"Archive of Our Own." Danny sat up, scrubbed a hand over his face. "Fan fiction."

He said those last two words in the same tone he reserved for pizza with pineapples, boys who wanted to date his daughter, and grenades stored in the Camaro's trunk.

"Fan fiction?" Steve was confused. His own sister had dabbled in fan fiction--he remembered Aunt Deb teasing her about it. "Those are stories about TV shows, right?"

"No. This is RPF." Danny replied, "Real People Fiction."

Danny typed something on the laptop, then turned it around so Steve could see the screen. "She wrote--that--about the Jersey Devils." 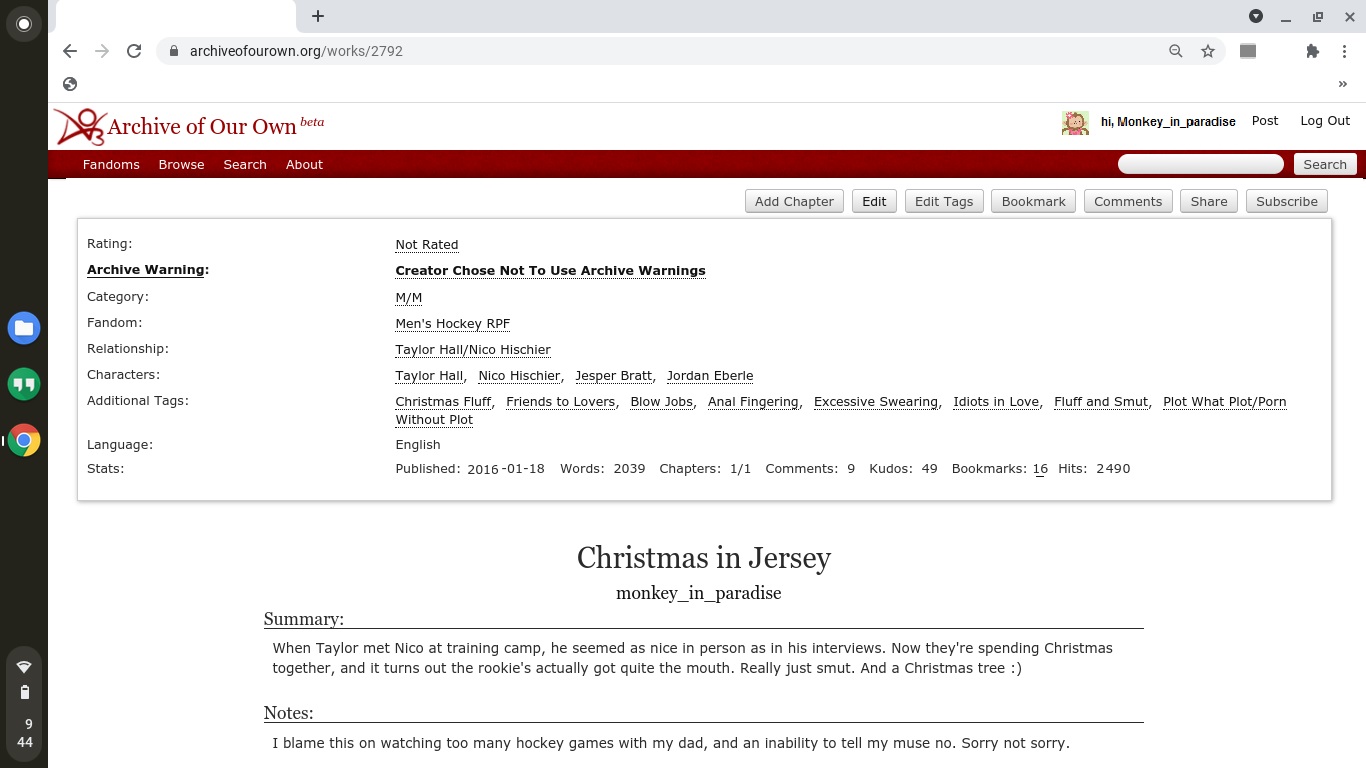 This? Required lots of alcohol.

And--it was Friday. They didn't have an open investigation.

"Grab a drink?" Danny closed the laptop, jumped to his feet. "I'm buying."

"Oh. Yeah." Danny cleared the browser--just like Jerry kept lecturing them to do. "Done."

Steve put a hand on Danny's arm, steering him out the door. Out of the corner of his eye, he saw Kono and Chin both give him a thumbs up.

Fuck. He'd been looking forward to watching the next Devils game with Grace and Danny, but now--