Apple of My Eye

In which being forced into watching Bran and Rickon on a family trip to the apple orchard might actually work out in Arya's favor.

It was all Sansa’s fault, Arya thought bitterly, but then again, what wasn’t? Being forced on a trip to the apple orchard was obnoxious enough already, but adding Bran and Rickon to the mix made it a thousand times worse. If only her sister hadn’t brought Margaery along—then Sansa would have been the one stuck babysitting their brothers, and Arya would have been free to do whatever she liked. But nooooo, Sansa had insisted on bringing her girlfriend with them, and now Arya was guaranteed to have absolutely no fun at all.

“Arya,” Rickon whined now, and Arya turned to him with a sigh.

Rickon pouted. He and Arya were squeezed onto the end of the hayride, with Bran and Jon sitting opposite them, holding onto Bran’s collapsed wheelchair. Sansa and Margaery were seated up near the front, giggling together. Arya shot them a venomous glance.

Rickon appealed to Jon. “Arya is squashing me,” he complained. Jon grinned.

“You’re supposed to be on my side here,” Arya reminded him.

The ride juddered to a halt. Rickon immediately popped up and bounced impatiently on his tiptoes until the tractor driver came around and let them climb off the ride. Arya and Jon lifted Bran’s wheelchair down and Jon scooped their brother up and lowered him into it. Once he was secure, Jon gave the handles to Arya, who shot him a pleading look.

“Sorry, no can do,” said Jon, giving her a salute. “Robb and I have important apple-related duties to attend to.”

“I know that means flirting with the staff!” Arya shouted after him, but he was already gone, followed quickly by Robb over to the hay maze, where a few pretty orchard staff members were standing. Sansa and Margaery climbed off the ride a second later.

“Have fun, Arya!” said Margaery sweetly as she and Sansa sauntered off, hand-in-hand. Arya ground her teeth.

“What do we do now?” Rickon wanted to know. Arya glanced down at him.

“Pick apples, I guess,” she said. “Which ones do you want to look at first?”

“The green ones,” piped up Bran. “The really sour kind. Those are the best ones.”

“Psychopath,” muttered Arya, but steered his wheelchair toward the green apple trees all the same. Rickon ran ahead of them, pausing to scoop several apples off the ground until Arya stopped him. “Don’t, those are all gross, see the brown spots? Mum would kill me if you ate one of those and got sick.”

“Fine,” Rickon said, throwing the apples back to the ground. “But there aren’t any other ones!”

“Hmm.” Arya scanned the trees, which had indeed been picked clean. “Looks like we should’ve come here earlier.”

“I bet there’s still some higher up,” said Bran. “Keep looking.” Arya craned her neck as they walked further down the row, scanning the trees for any sign of fruit. “There!” shouted Bran, pointing. “I see one!”

“Rickon could stand on your shoulders,” suggested Bran.

“I dunno, that sounds dangerous…”

“Yeah, Sansa would never let us do that,” said Rickon. Arya frowned.

A moment later, Rickon was balancing on her shoulders as Arya held on tightly to his feet. “A little left,” Bran directed her. “C’mon, stretch, Rickon...there!”

“Success,” said Arya, as she lowered Rickon to the ground and dropped the Granny Smith into their basket. “One down, however many to go.”

“We should try and get one of every kind!” Rickon enthused. Arya considered it.

They maneuvered through the rows of trees with skill, dodging other orchard-goers and ducking under branches, all the while keeping their eyes peeled for apples they didn’t yet have. Golden Delicious, Gala, Ida Red, and more were added to their collection before they faced an aisle of trees that had been almost picked bare. When Arya saw a silver-haired girl reaching up to take the last apple from the row, she may have gone a little mad and shouted, “Get her!”

Rickon immediately went charging straight for the poor girl, who was looking around in confusion, while Arya snatched the handles of Bran’s wheelchair and ran after him. “Rickon, stop!” she called, but Rickon kept going and crashed straight into the silver-haired girl, who nearly fell right over. “Rickon,” Arya scolded.

“You did sort of tell him to,” Bran added. Arya winced, looking up at the silver-haired girl, who was dusting herself off.

“Don’t worry about it,” said the girl, whose voice was soft and lightly accented—Arya wasn’t sure where from. Her silver hair wasn’t the only striking thing about her; she also had violet eyes, very smooth skin, and, oh yeah, was the prettiest girl Arya had ever seen in her life. She tried not to stare.

“We’re trying to get all the apples,” Rickon explained.

“All the apples?” The girl’s mouth curved into a mischievous smile. “Sounds like a challenge.”

“You don’t want to compete with us,” said Bran, puffing up his chest. “We’re top-class apple pickers.”

“Oh, I believe you,” said the girl. “But I, too, am something of a master in the sport. They call me Daenerys, the Picker of Apples, Queen of the Orchards and the Fruit Gardens, the first of my name.” She grinned at Arya. “Other times they just call me Dany.”

“I’m Arya, and these monsters are Bran and Rickon,” said Arya, pointing to her brothers. “And we’d like to submit an official challenge to your title as reigning Orchard Queen.”

Daenerys pulled out her phone. “Fifteen minutes on the clock sound fair? Whoever comes back with the most varieties of apple wins the crown.”

“Sounds perfect,” said Arya. Rickon jumped up and down in impatience.

Dany shot off in one direction and Rickon started to head off in another before Bran called him back. “Wait, wait! We need a plan of attack!” He pointed toward the more crowded lanes of trees, the ones still abundant with apples. “Rickon, grab apples from those trees. Pull from lower branches or take them off the ground if they aren’t too gross. Go fast. Arya, we’ll take the emptier lanes.”

“All right,” said Arya, and flattened herself against the handles of his wheelchair, pushing as hard as she could. She and Bran plowed through the rows, using Bran’s eagle eyes to find the hidden, high-up suspects. If an apple was too far for them to reach, Arya would vigorously shake the branch while Bran waited beneath, poised to catch it. They continued this way until Arya’s alarm went off.

“Better hope this is enough,” said Arya, wheeling him back to their rendezvous point, where Rickon and Daenerys were waiting. Rickon dumped his haul into Arya and Bran’s basket, but even with his contribution, their hoard looked about the same size as Dany’s. “How did you do that so fast?” Arya asked. Dany winked.

“I have my methods.”

“Count them up!” Bran ordered. Rickon went through their basket, meticulously laying out each apple in a row on the grass. Dany did the same. When both sides had finished counting, Arya crossed her arms and gave Dany a pointed look.

“Oh no, the challenger goes first,” she said, holding up her hands. Arya glanced at Rickon, who whispered their total in Bran’s ear.

“You might as well accept defeat gracefully,” said Bran. “Because we have collected...sixteen different apple varieties.”

“How many do you have?” Rickon inquired. Dany’s mouth quirked up.

“A tie!” said Arya. “Well, this is unprecedented. We’re going to need to have a final face-off.”

“How? We’ve picked all the apples there are to pick,” said Bran.

“That’s not the only thing you can do here,” said Dany. “I propose an apple-bobbing competition. Think you can handle it, Arya?”

“Oh, I was born for this,” said Arya, cracking her knuckles. “Though you should know, I take winning very seriously.”

“I gathered,” said Dany, gesturing to their apple collection. “Especially considering you attempted to have your brother take me out just twenty minutes ago.”

“She’s merciless,” piped up Bran. “She’ll beat you in a heartbeat!”

“I wouldn’t be so sure,” said Dany. “Come on, it’s this way.” She led them over to a barrel filled to the brim with slightly cloudy water. Arya glanced around for orchard staff, but there was no one—probably being distracted by her older brothers. All the better.

“So whoever gets an apple the fastest…”

“Wins the orchard crown,” Dany confirmed. “As well as my undying respect, but that’s just a bonus.”

Arya sucked in a breath and plunged her head into the barrel. The water was lukewarm, and the cloudiness was rather suspicious, but she persevered. Her forehead bumped into Dany’s, and then her cheek brushed something smooth. Turning her head, she sank her teeth into the fruit and pulled her head out of the barrel a fraction after Dany emerged, hair dripping everywhere.

Bran and Rickon groaned in disappointment as Arya spat out the apple and wiped her face. “Arya, you were so close!”

“Tell me about it,” said Arya, as Dany wrung out her hair. “I guess this means you’re the victor.”

“Not necessarily,” said Dany. “I’d be willing to compromise and have us share the title...under one condition.”

“And that would be?”

“You give me your number.”

“Ooh,” crowed Bran and Rickon from behind her, but Arya didn’t take her eyes off Dany.

“I think that could be arranged.”

Dany smiled. “Then I’m pleased to call you three my co-rulers. Welcome to royalty.”

Bran and Rickon cheered, and Arya felt herself blush slightly when Dany reached across the barrel to shake her hand. “Thanks,” she said. “You made this much more fun than I thought it would be.”

“Arya!” called a voice, and they all looked over to see Sansa and Margaery standing in the line of people waiting to board the hayride. “Time to go!”

“Looks like we have to get out of here,” said Arya, taking Bran’s wheelchair handles again. “Walk with us?”

“You’re going in my phone as “Arya Apple Queen,” just so you know,” said Dany, as the four of them made their way down the hill to where the hayride was waiting to take the next group out of the orchard. Arya laughed.

“Wouldn’t have it any other way.”

She, Bran, and Rickon all waved to Dany once they were seated, and Dany waved back, beaming, until the ride’s engine started up and they were driven away. A moment later, Sansa plopped down in the seat next to Arya.

“Sorry I dumped you with the boys,” she said. “I hope it wasn’t too terrible.”

“Actually,” said Arya, as she glanced down at her phone and watched it light up with a text from a new number, “I sort of think I owe you one…” 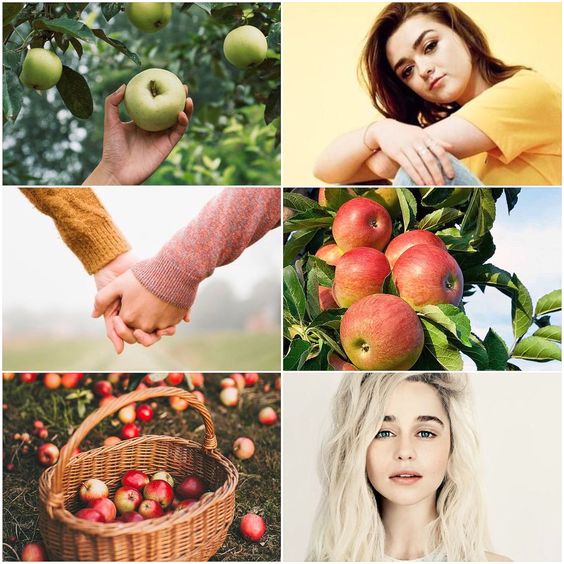