“Are you sure?” Harry whispered. “If I go, you’ll have to trust the babies to speak for you.”

The basilisk glared. “My mastery of English is exemplary.”

The tip of its tail twitched guiltily. “I do not care to. Besides, between the three of them I am sure they will manage to be ... somewhat comprehensible …” It trailed off, then laughed. “You are delaying, Snakeheart. I know your tactics. Go before they wake up and you loose your resolve. We will manage diplomacy without you. And when you return, the home will be ready for you.”

He threw his arms around its nose. “I’ll miss you!”

“Why are you acting as if you are not gone for months every summer?”

Harry pulled back, meeting its gaze. “I guess I don’t want to miss anything the babies do.”

“They will be hatchlings for your lifetime, Snakeheart. I advise you: escape in the brief moments that you can.”

Laughing, Harry picked up his pack. “All right, all right. I’ll see you soon.”

“Safe journeys, Voice of the Deeps.”

“Ugh!” Turning his back dramatically, he marched out of the den.

Dumbledore was waiting on the front steps.

“Ah, Harry.” The headmaster smiled at him. “Off for the summer?”

“Have a safe journey, my boy. Can I expect you at the start of next term?”

“Yes,” Harry said definitively. “If I’m being honest, you can probably expect me before that.”

Harry shrugged, grinning. “Sorry, headmaster. I’ve had to keep a lot of people’s secrets. Hopefully I’m almost done with it, but you never know.”

Dumbledore nodded. “Secret-keeping is a tricky business. I won’t pry, my boy. I’ll leave that to you.”

Harry nodded firmly. “Right. I’m just off to say goodbye to my cousin.”

She was already waiting at the water’s edge, staring dreamily into the distance.

“Which secrets did I keep!”

She stared pointedly at him. “Araeo? And you kissing him?”

“What—I didn’t keep that a secret, I just didn’t tell you! Ava, do you have a kissing secret?” He dropped to his knees. “You have to tell me!”

She grinned. “Alright, fine, only because I’m going to explode if I don’t. There’s sort of … this apprentice … I see them sometimes when I’m going to the palace with Samba …”

“… Amirtha. But they go by Mirth. Don’t tell my mothers.”

“Why haven’t I met them?” Harry demanded.

“Fllf, maybe because you haven’t been home for ages? It only happened a few weeks ago.”

“Those were extenuating circumstances!”

“You have no idea. But Surry’s a bit far, even for the Far-Fathomer. The basilisk had to hold it by the tail in the end so it wouldn’t chase me. I still don’t really trust it won’t catch up half-way.”

Ava giggled. “Alright, suppose you’d best be off. If you don’t bring me something utterly tide-turning back, I’ll drown you.”

“And if you don’t find a waterway out to the new den before I’m back, I’ll drown you.”

They hugged and kissed and Harry set off for the forest, spying Dumbledore watching from the stairs. He waved, and Dumbledore waved back, just a glint of a silvery hand in the distance.

It was an easy trek to the thestral pond, the new unofficial meeting place for his friends. Ava hadn’t met them there only because she was expected in Alimnion for a meeting.

Only Araeo had arrived, speaking softly to Serpentus. When Harry made his way through the trees he turned, hand already outstretched. Ba-dum, went their hearts, and then the beat sped up as Araeo tugged him close and kissed him.

“Hi,” Harry said, staring into his foggy eyes. “Are you ready?”

“Oh, yes,” said Araeo eagerly. Across his back were packs of supplies. “I’m so excited; I can’t believe mother agreed.”

Araeo shook his head. “She was saying goodbye to Draco at the train station.”

“Oh.” That was rather sweet. Draco and Limmy had formed a close bond upon both making it back to Hogwarts, traumatized by Lucius Malfoy once more. In Limmy’s case, this had been slightly ameliorated by having beaten Lucius half to death with wand and fists. The only reason Malfoy was still alive in Azkaban was because Dumbledore and Tippy had located her in time to pull her off and save her from a manslaughter charge.

It had been Limmy, Draco, and Daphne who had gone against strict orders and forged their way into the woods, found the thestrals, and flown to the edge of the deep wood in time to spot Harry hopping back over the stream, snake across his shoulders and tether to reality whittled to a thread.

Araeo sighed and wrapped Harry in his arms. “Thank the stars you’re safe, Snakeheart. I can’t believe I didn’t See any of that at all.”

Araeo shook his head. “You know how I See. Specifics. Details. Not half-dreamt rituals. That was all you, I believe.”

“Please don’t tells me I’s going to be a third wheel this entire trip,” drawled Limmy, crossing into the clearing. “I swears I is staying here instead.” She smiled at them, tired and drawn but happy. The tip of her right ear had been severed, and there was a long, healed scar under one eye. Nowadays, when she was angry, it weeped blue magic. She was rather fond of it.

“You is definitely not going to be,” Harry said, grinning and hugging her, feeling their magic spark together in welcome.

“Right,” she said. “Everything ready?”

“Snake, check,” said Harry, peeking into his pack, where the snake stared up at him with hopeful trepidation. “Hello,” he hissed. “Ready to go to your new home?”

“You promise?” hissed the snake. “It is warm? Dark? With lots of meat?”

“Promise,” Harry said. “I never break my promises. It will be a perfect fit.”

“Aelisf!” Limmy cried. “Araeo, does you know what that means? It means—”

“Ever upward,” Harry said triumphantly. He took Araeo’s and Limmy’s hands, and they began to walk.

The experience of sharing this fic has been a dream come true. I never imagined ever upward would be anything more than a seed of a story in my head. It turned into one of the things I’m proudest of having created in my life. Thank you to every single person who has read, commented, drawn fanart, made memes, chatted on the discord, or simply loved it from afar—whether you've followed it since the prologue or started reading two days ago. The fact that other people out there love this wild story as deeply as I do is something that has impacted me profoundly. Thank you so, so much <3 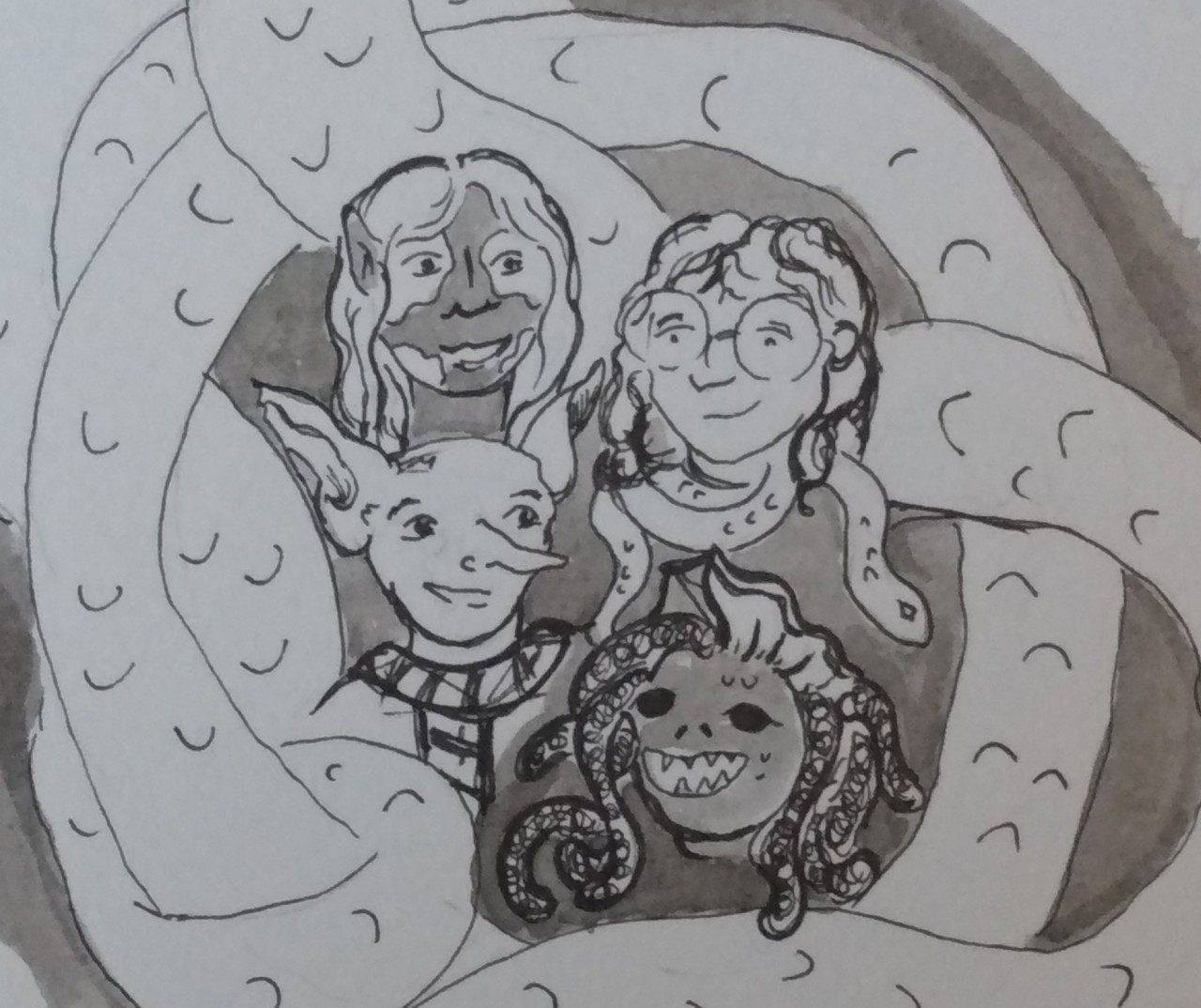