[PODFIC] a history of the body, by northofallmusic

A fic about the complicated nature of having a body, and also the versatility of sex toys. 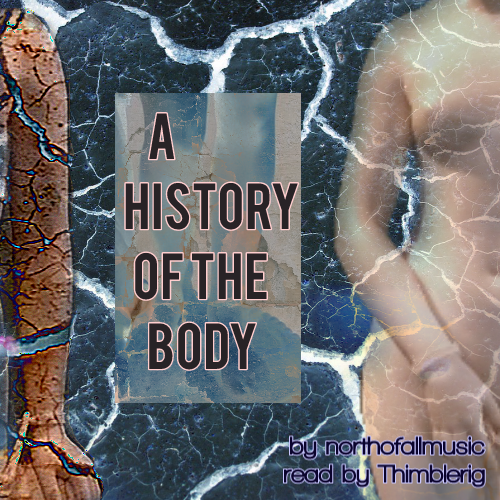 ... The world is strange. Mercifully, terrifyingly, the world is strange. Lan Zhan, who only goes out to bars when she wants sex, went to a bar one night—it was winter, it was her birthday—there was snow in the air, and people were excited about it—about the cold clean smell of it and the way the flakes caught on their clothes and their hair. It was her birthday and she had left the restaurant where she’d eaten with her brother and uncle feeling strange and dislocated and as though she might stop existing if nobody looked at her but might scream if anyone did. It was winter and she wanted to fuck someone hard so that they could do the screaming instead, could bleed it out of her and leave both of them a little more relaxed, and so she went to a bar. She found Wei Ying. Did not fuck her—has not fucked her—cannot fuck anyone, any more, without thinking about fucking her. But found her. What matters is that she found her. Again. What matters is the late night phone calls and the laughter and way some piece of Wei Ying’s clothing always seems to be forgotten in Lan Zhan’s home, that Lan Zhan mentioned the forgotten clothing once and Wei Ying said maybe it’s just a ploy so I can keep coming back and perhaps meant, in fact, that it was a promise—I will keep coming back...

"Jiejie," Wei Ying says, strained, "I know I had a whole thing about not knowing what I want, but, uh—I'm maybe going to die if you don't put something in me soon. Actually."

In response to a prompt by Anonymous in the mo_dao_zu_shi_kink_meme_2020 collection.
Phew, here we go, yet another "quick" "lightweight" kinkmeme fill that got away from me. we've got friends to lovers! we've got caring for old injuries! we've got vibrators! g-spot massage! People cry, but like, romantically! The setting of this story is pretty ambiguous, because I expected to be writing maybe 2000 words of massage turned sexy and not whatever this is; we all make mistakes in this life.

De-anon please. I know what I did.

Any d/s dynamic if you want, switching is my fave, any canon