Another weekend, and another opportunity, Sakura confessed her feelings for Nozaki, from there blooms a romance that gradually develops throughout while also dealing with life in high school, the drama, and adventures they go on, no matter what they come across they will overcome it together. Loving him was one of the best choices she has made, with graduation and eventual college around the corner may also open new doors.

Chapter 1: Confessions of a Girl 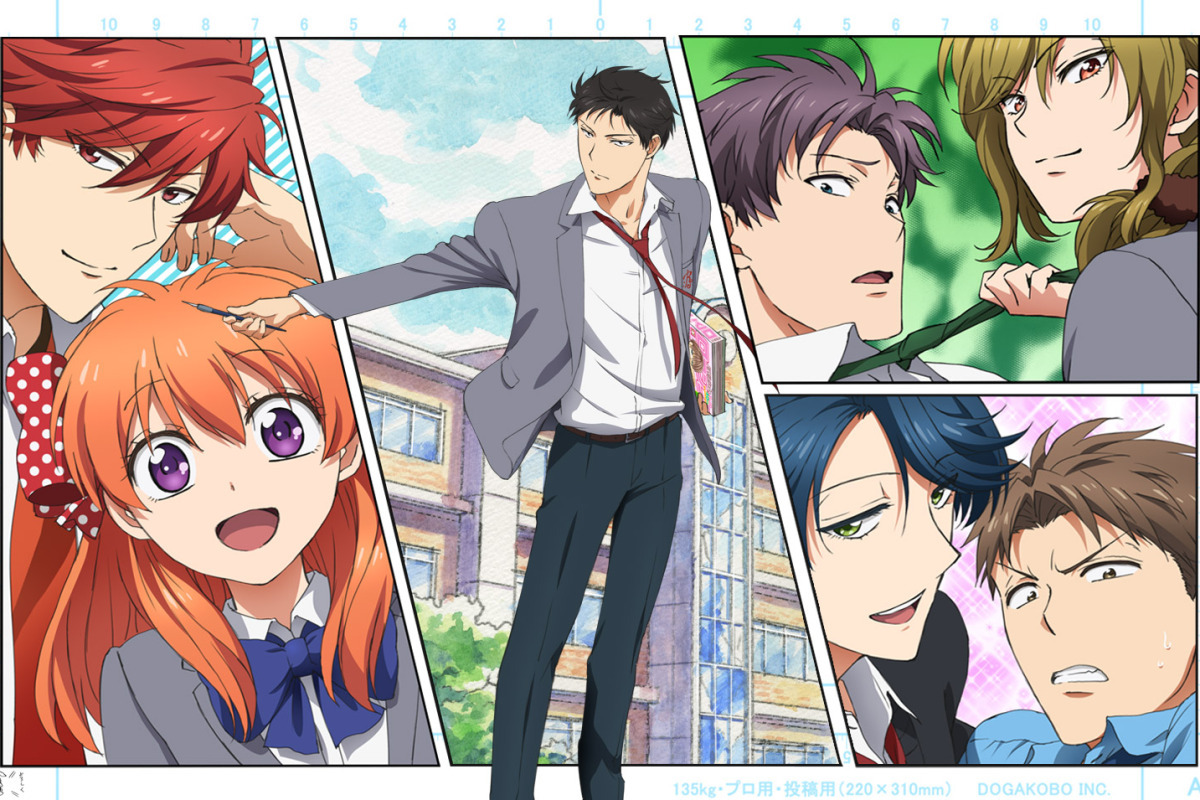 Sakura was walking to Nozaki’s place, since it was the weekend she wasn’t in her usual uniform, doing same thing like every weekend has been. Stay over and help write his manga, carrying her bag that had clothes, she still couldn’t confess her feelings to him. Tonight though she plans to do it officially instead of running away like she has been doing, they knew each other for awhile.

To be honest anytime she tries to give him hints he always takes it as a new storyline for his manga, or he takes it as let’s study people and take photos. Loving him this crush she had is the reason why she didn’t let it bother her. Even though it kills her on the inside,  she does it because Nozaki is happy when he writes manga or draws it.

She was wearing her blue jeans and white button up shirt with heels, she never wore outfits like this, heels especially aren’t her thing but this was dedication. Sakura knew she was beautiful already but she wanted to up her game and look more appealing then how she was, and maybe it will help hint. If he notices her dressed up maybe he will see what she’s trying to do, at least that’s what she thought.

Arriving at his door she went in, Nozaki gave her a copy of his key awhile back so she could come and go as she pleases. Opening the door she entered taking her heels off, “Nozaki, are you here?” Making her way to the kitchen seeing him in his usual apron making lunch for them like usual. “Oh hey Chiyo, didn’t here you come in,” she waved him off “it’s okay no problem.”

Bringing the plates out she followed behind him, “you look nice today,” he said to her earning a blush, “oh-um...thank you Nozaki.” She smiled sipping her tea. “So I was thinking for the next story line we do the main character and the protagonist having a conflicted relationship because of another guy.” Sakura listened and thought it over.

“Seems like a good idea but Nozaki... it seems it needs more to it,” she watched as he wrote down the notes Sakura gave him. Working for a few hours it soon became dark and they already had the characters drawn out and an outline. Stretching, Sakura got up and went to use the bathroom changing into a tank top and shorts.

Observing from the doorway she saw him so focused, he looked good when he focused, and when he was writing or drawing he looks so handsome. Deciding now is the time to do it she walked over and was now at his desk, “everything okay?” He asked her in his usual composed persona. Sakura just replied back with “yeah I’m good it’s just... I want to tell you something...”

Looking at her with curiosity “what is it?” She started to choke up on her words, now having complete eye contact. “Well... Nozaki... I to be honest... I like you more than you know, just being your assistant or a friend I don’t mind , but I haven’t told you because I was too scared to or you were too into planning out your manga to notice my hints.” Continuing on, “I want to be your girlfriend... I mean... I just want you Nozaki,” she let it all out feeling a weight lift off her.

Hearing her confession, I’m not sure what to say, I mean, do I feel the same way about her, this feeling in my heart

“How long have you felt this way about me?” He asked her, and she explained “ever since we first started talking, and getting to know each other, and I guess before that I noticed you around.” She turned away feeling embarrassed, afraid to be rejected, only to feel a pair of arms wrap around her “I like you too Chiyo,” tearing up she turned to face him.

“You really do?” Looking up seeing him looking back at her, and instead of answering he just pulled her in and held her. Closing her eyes she smiled, feeling his warmth, her heart was finally accepted, the waiting was worth it. As she thought that to herself, she was trying to put her arms around his neck reaching up, seeing what she was trying to do he picked her up.

Arms now around her lower back she leaned in to kiss him, feeling him kissing back, it was a different feeling, everything she felt before washed away. All the regrets and doubts were now gone, she was happy, the guy she loved is Nozaki. Pulling away he still held her, “I’m sorry for not noticing before,” she just laughed “it’s okay, I didn’t do better myself telling you.”

Setting her down she just continued to hug him feeling at ease, she’s so happy and that’s all I’ve wanted for her, I started to feel it in my heart. Nozaki had no idea how to feel at first, he has never been in love, he has never had a girlfriend. Sakura made his life more fun in high school, without her sure he would have his friends but, it was different.

Feeling her let go he just leaned down and kissed her, seeing the time and the fact they needed a break, rooming arrangements made her nervous. To be in the same bed with Nozaki, I mean it isn’t the first time but it’s different now. “Would you like to sleep together?” He asked her and that caused her to blush like crazy, “sure, if you’re okay with that.”

Only to feel herself get picked up, “Nozaki,” she said laughing, he laid her down first then got under the covers with her. Laying on his back with an arm behind his head he felt Sakura lay on his chest, using the other arm he wrapped it around her. “Good night Nozaki,” she said smiling eyes closed, “good night Chiyo,” kissing her head.

Holding each other throughout the night, it was the best sleep they both have gotten in such a long time, morning came around too soon. Seeing that Sakura was still asleep he quietly as possible got up and went to make breakfast. His bed, it feels so warm, and smells so nice, she flipped over now facing the wall. As she was falling back into a deep sleep again she felt a hand on her abdomen and felt him kiss her on the cheek, moving her hair.

“Morning,” he said to her, “morning,” leaning up to kiss him, “breakfast smells good,” she said to him getting up. “Your favorite,” he picked her up carrying her out and setting her down, a happy couple, an uneventful night, it was best she could ask for. Eating up they both decided to go out later, check out the shops and have fun.