Something happens to Chiyo, and Nozaki does everything he can to help her through it, while also experiencing the beginnings of a happy relationship. 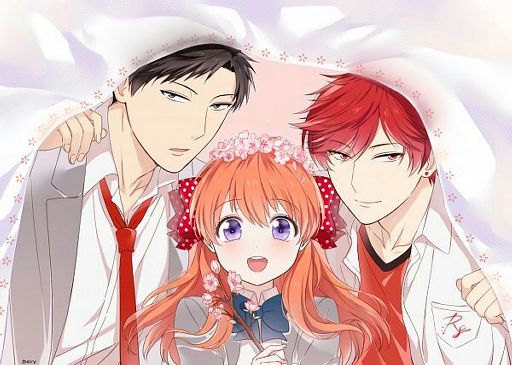 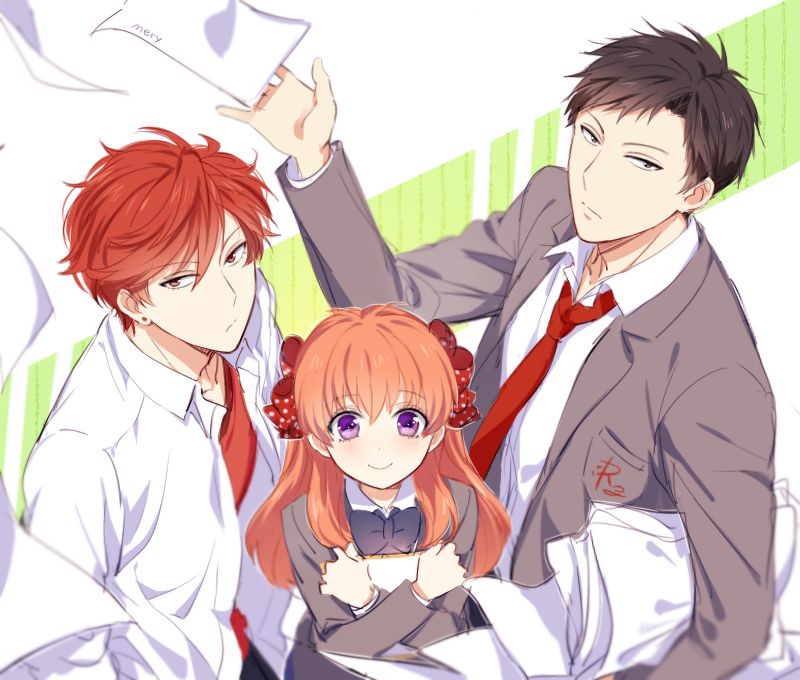 When they arrived at school they parted ways since they didn’t have class together today, before they did though he kissed her and she kissed back. Waving at each other she walked away, as she did she bumped into Mikoto. He took her wrist and dragged her along “what is it Mikoto, where are we going,” seeing as there was still time they were in another classroom and he pushed her against the wall.

Stroking her hair, she tried to leave but she was held in one place by two arms on each side, “I just want to talk Chiyo, relax,” she looked into his eyes. He pulled away and let her gather herself, “so, I know we’ve been friends since of course Nozaki introduced us, but, it’s been awhile and I guess, I’ve had feelings for you since we first were working together.”

He said while stretching his arms and taking a seat on one of the desks, “I... I had no idea you felt that way, but I’m with Nozaki, I’ve lov...liked him for a long time.” She said looking away for a second, she felt him approach again “you know, you’re cute when you’re like this Chiyo, girls find me irresistible but you, you are different from them.” He said smirking.

“Just give it a thought over Chiyo, after all,” he came close and whispered into her ear, “I really do like you Chiyo,” he said stroking her hair and kissed her. Walking away Chiyo made sure he completely left and just hugged her knees to her chest crying.

Do I tell Nozaki?

She was holding her knees close

What would he think?

She cried harder, but silently.

Would he believe me?

She decided to stop tearing up.

I need him, Nozaki.

Cleaning her tears up she left, running through the halls as the students watched, nothing but just the sound of her steps as she ran. Not caring for others attention, seeing Nozaki in the distance she ran to him, “Nozaki, I need... to tell you something.” Tearing up he put his arm around her and they walked away together.

Dodging the direction Mikoto was coming from, the red head could be spotted miles away, Nozaki was confused. Making sure they were in the clear she told him everything, he just kept a hand on her shoulder calming her down. “Nozaki...” she cried moving into his chest, he held her until she calmed down, “what happened Chiyo?”  She looked up to his worried eyes.

“Well... you see... earlier when we separated off I ran into Mikoto, he took my wrist and dragged me off to a classroom that had no students or teachers... he pushed me against the wall and was saying how he liked me and that me being with you, he could do more, and when I pushed him away and told him no he forced a kiss on me and told me to think about it, I’m so scared Nozaki.”

Something inside him snapped, “it’s alright Chiyo, it’s okay I’m here, I’m not mad at you, we can get through this.” Nozaki was thinking over what he should do to help his girlfriend out who literally broke down. Deciding that they should leave early they signed out and he walked her out, covering her with his jacket and guiding her.

Bringing her to his place he opened the door and guided her to his bedroom, she took off her uniform and changed into shorts and one of his shirts. He came back after a few bringing in tea and helped her get comfortable, “you have nothing to worry about, alright?” She just gave a small smile, and he kissed her forehead and held his hand.

Leaving her be he closed the door, allowing her to relax and try to forget what happened so that she doesn’t carry the burden of remembering. Meanwhile he was outside his apartment on the phone with Mikoto, “we need to talk, listen Chiyo told me what you did.” Mikoto thought it over “we just talked, listen I know I overstepped and I shouldn’t have, I did kiss her but, I told her I liked her and she rejected me.”

Nozaki processed what he said, “you know she’s uncertain and scared right now because of you? How are you going to fix this, I mean I have no idea what to think of you right now.” Nozaki was just annoyed with the whole thing “listen I’m not mad, but you should watch yourself next time, because if you hurt her again I’ll hit you, got it?”

Mikoto understood and decided to talk to Chiyo when things cool down, and they left it at that, coming back into his apartment he opened the door to his room. Chiyo was fast asleep, deciding to join her he moved her over carefully and held her close, she opened her eyes for a second and closed them, With a smile she fell asleep to his heartbeat.

Chiyo awoke to Nozaki getting up, “morning, I’m gonna make some breakfast, let’s call today a sick day alright?” She just nodded and thanked him, wanting him to carry her she acted cute, “can you carry me?” She asked smiling, he just came back over and held her in his arms walking out. Setting her down after he got into the kitchen and started cooking.

Having fun while doing so Chiyo was playfully touching Nozaki while he was touching her back, they had fun enjoying each other. Cooking breakfast together was a dream for her, she wanted to do this with Nozaki, after all it’s something many couples do. After awhile she stepped out kissing him on the cheek, checking her phone it was a text from Mikoto.

I’m sorry for how I acted Chiyo, hope
we could move past it.

It’s okay, thanks for apologizing, I’m
Sorry I couldn’t return your feelings. X

Closing her phone she went to lay down, thankful for this day off, she closed her eyes, not too long after she felt a hand on her abdomen and a pair of eyes. Filled with worried Nozaki looked at her, Chiyo could see his concern for her, it warmed her heart, laying back up she hugged him. He hugged her back stroking her long hair, “I’ll always be with you Chiyo,” he said to her and they gazed into each other’s eyes.

Making out passionately they were now on his bed, he pushed her down kissing her gently but heatedly, his arms were strong. Moving his hands to the back of her thighs below her ass, he lifted her to now be in his lap. She could feel him, his heartbeat where her hand laid, he wanted her, they made love again, in between her legs he felt as she laid back they were interlocking hands, he was kissing her neck.

He filled her to no end, he was still going, Chiyo just let him, she didn’t want it to end, Nozaki was the only one who could make her feel this good. After they were done they both took a shower and went to lay down. It was an amazing day for them, to relax and enjoy each other, she couldn’t wait to take on the future with Nozaki.