The Darker Side of Dance

For years, Kagome's red pointe shoes have driven her to the brink of collapse, and forced her to choose her love of dance over her love for Inuyasha--her husband. Tonight, after an exhaustive performance of Swan Lake, she makes a important decision, with Inuyasha by her side.

Disclaimer: I don't own Inuyasha, or any of the characters from the manga and/or anime.

Hello everyone! I hope that wherever you are, you're safe and doing well.

So I was heavily inspired to write this based on kalcia's beautiful gothic ballerina Kagome (see in the story for the art). For those of you who don't know, I'm a long-time ballet dancer and former choreographer, and kalcia's art just really spoke to me. It also evoked one of my favorite films, The Red Shoes, and you will see some of the elements of that story woven in here, as well.

Special thanks to kalcia for being so inspirational, and so gracious as to allow me to use her art in this story (like I am so grateful). And, to gribedli and Ruddcatha for reading! 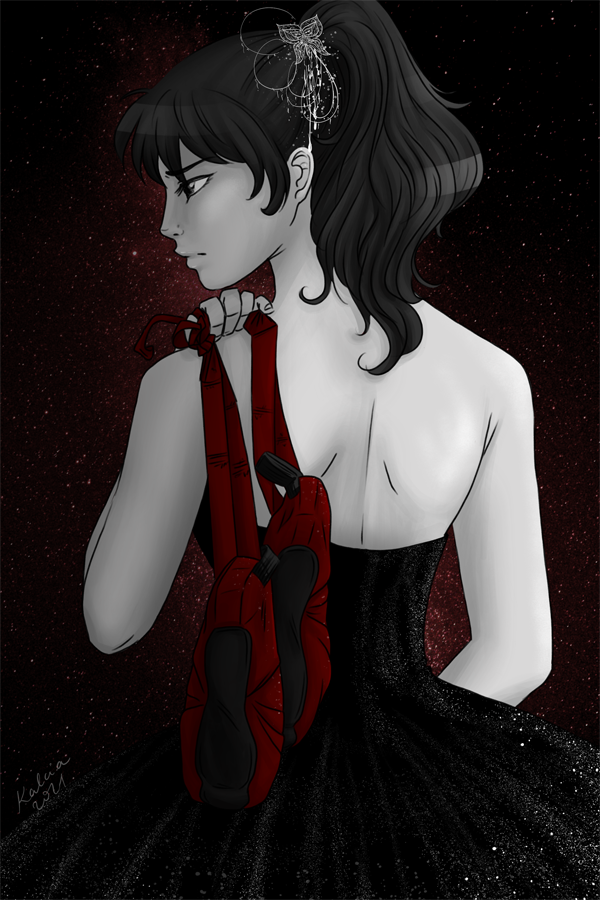 She looked out at the stage, her shoes slung over her shoulder, contemplating her past, her present, her future.

It had been her dream, all her life, to dance.

From the time she was a child, she had envisioned herself onstage, performing for others, dancing her heart out for others. And not as a part of the corps de ballet: as a principal dancer, as the star of the show. As the one everyone paid the big money to see.

Through it all, they whispered in her ear, words of encouragement, of insistence, of possession. That she could do it; that she could be the best. If only she danced a little longer, a little harder, and a little more dangerously.

The shoes had been there, through it all. Her one constant companion.

Save for Inuyasha. The other near-constant who remained by her side.

Or at least, the shoes wanted the dance more.

But Kagome, the shoes...what was the difference between the two? Did it even matter?

Even now, she could feel their call, their pull, their yearning. Whispering in her ear:

Lace us up again, Kagome. Let’s dance together, just one last time.

Tonight had been what she hoped would be the final straw. The thing that would cause her to throw the shoes away for good. Odile, the Black Swan in Swan Lake , is famous for her 32 fouettes. Every ballerina who dances Odile must dance the 32 fouettes. Kagome had danced this role before, and her body was easily able to handle that number of turns.

The shoes, however, had other ideas.

Even if they weren’t together anymore. Even if their marriage was now in name only.
Because Kagome had chosen the dance. Even if she didn’t want to.

Kagome danced her part; she brought down the house. Odile always did get the bigger ovation when compared to Odette, anyway, but still. The number of turns had left her barely able to perform, and yet the shoes compelled her to push forward, to continue her performance. To be the best.

And Kagome was the best.

But now, standing backstage, her feet bloody and bruised and swollen, she had to wonder if it had all been worth it. The pain. The sacrifice. The loss.

“Kagome.” His gruff voice, coming from behind her, still set her on edge. Still fired up parts of her body that nothing, not even dance, would be able to fill. It was him, and only him, and she turned her head slightly, looking at him out of the corner of one eye, a sad smile on her face.

“Keh,” he scoffed, his dog ears pinned back, his handsome face twisted in a scowl, his golden eyes burning with his love for her. “You’ve said this before, and you couldn’t quit. What’s different this time? Nearly collapsing on stage give you a new perspective?”

“They...they possess me, Inuyasha,” she admitted. “Like they did tonight.”

In two strides he was behind her, turning her around, and wrapping her up in his arms so tightly that she couldn’t breathe. His lips were on hers: bold, insistent, hungry. Taking her for his own; possessing her, the way that the shoes had possessed her.

“They cannot have you, Kagome,” he whispered desperately between kisses. “They can never have you. You are mine, just as much as I am yours. The shoes don’t own you; the shoes don’t tell you want to do.” His voice was dark and rough. “Please, Kagome. Give them up. Give this up. Come home. With me. For us.”

To feel all the things a woman should be allowed to feel.

But even now, safe in his arms, Kagome heard the shoes’ gentle call. Felt their tingle against her skin.

Kagome.
They knew her name.
Kagome.
And they called to her, to the deepest, darkest parts of her soul.

Kagome pressed herself closely against Inuyasha, shaking her head, no.

The shoes were not going to get her. The shoes could no longer possess her.

She was her own person.
She was Kagome.
And she only belonged to those she chose to belong to.

“Yes?” He was right there. So close. Just as he had always been. Kagome knew that he would support her in whatever decision she made. No matter where they had been or what they had gone through…

She and Inuyasha...they were meant to be together. Much more than Kagome and those stupid, hurtful, possessive, shoes.

And that was more than the shoes could possibly overcome.

Kagome gripped the ribbons of the red shoes, broke momentarily from Inuyasha’s grip, and hurled the shoes forward, into the darkness of the stage. Inuyasha gasped, and Kagome sank back against him. Together, they heard the shoes clatter on the floor of the stage, bounce away, and come to settle someplace on stage left. She sighed, then looked up at him, her gray eyes tired and weary.

She knew that he could hear the pain, the resoluteness, in her voice, and he held her to him tightly, tenderly, carefully. She was completely wrapped up in him again, and Kagome buried her face in his shoulder, sighing deeply, clutching at him with everything that she had.

Because now there was a hole in her heart that nothing could fill. Not even Inuyasha, no matter how badly she wanted him to be the one.

But Kagome had thrown the shoes away. She would resist, and she would move on with her life.

She reached up and caressed his cheek tenderly. “I love you,” she breathed, “and don’t let other people tell you otherwise. Because I’m your heart; you know it to be true.” She paused. Dare she say it?

“Because I am yours, and you are mine. Because we belong to each other. No one...no thing...can tear us apart. Not anymore.”

Except what Kagome never told another person was that the day she left the shoes behind?

She left a piece of her soul behind, too. A piece that she desperately hoped that, through Inuyasha’s love, she could rebuild and start anew.

The shoes, though, had other plans for Kagome.

She might have thrown them away, but they knew:

She would be back.
And they would be waiting.