Before the Blossoming of Jasmine

It's another night of festivities for the Kenshingumi and Oniwaban. Kaoru and Misao have imbibed enough alcohol to fry any sense left and enter into an arm wrestling contest for entertainment.

And Kenshin gets to see a whole other side of Kaoru. (And everyone else does too much to his dismay.) 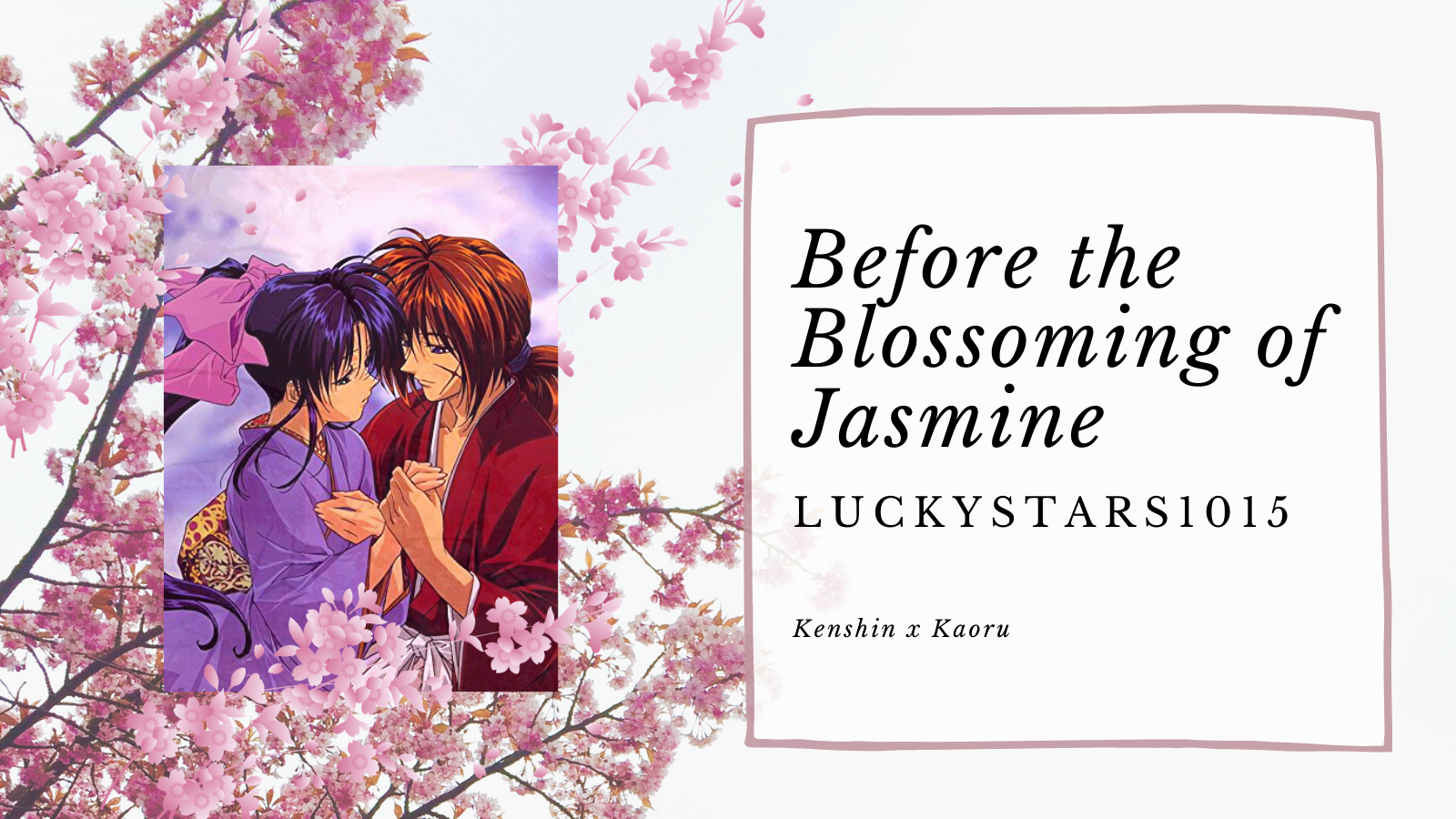 The moonlight bounced jovially among the members of the Kenshingumi and the Oniwaban. Once great enemies, they were now great allies. Sake merrily passed between everyone as they celebrated their great win in the salvation of Kyoto.

Kenshin was grateful to be here to share this victory with everyone. While he started this journey alone, he found even more friends than he could have ever hoped at the end. As he pleasantly listened to Sanosuke's banter with the men, he positioned himself in a way to see the ladies' side, too. His gaze couldn't help but stray towards Kaoru. He had missed her deeply during the journey.

Kaoru was currently laughing gaily at whatever Misao had said. The man was glad to see Misao and Kaoru getting along so well. The ninja and the Kamiya dojo leader could probably raise more hell than all the rest of them combined. Kenshin hoped they weren't recounting any embarrassing stories about him like women often do when they gossiped. No, they seemed to be in some sort of test of strength.

"I'm waaaaay stronger than you when it comes down to muscle!" Misao slurred as she put her hands on her hips in a power pose. Somehow the alcohol had made her even more impossibly loud.

"Oh yeah?" Kaoru challenged. What happened next made Kenshin thankful Yahiko had already been knocked out cold after his first sip of sake. No student should ever see their master this drunk.

Kaoru, too drunk to care about modesty, boldly shrugged off her gi and slapped her biceps, almost akin to a sumo wrestler. Thankfully the bottom half of the gi was still slipped into her hakama or else everyone would have caught even more of an eyeful. All the women cheered at such a brazen display.

A wolf whistle slid through the air and a low growl reverberated through Kenshin’s chest without him even realizing. Nothing could get a man’s head to turn quicker than a woman undressing. Kenshin’s eye ticked. He knew the men were cheering for entirely different reasons.

Sanosuke’s grin was wide as he bumped shoulders with his redheaded friend. “Looks like Lil’ Miss Kaoru grew up a bit on her journey to Kyoto.”

The usually good-natured Kenshin could not reply as his attention was rapt on every breath Kaoru took. The alcohol had taken her captive, sending a brilliant red flush through her entire body. She was taking deeper breaths, making the rise and fall of her bosom even more mesmerizing. If Kenshin only had one wish, he would desire that this sight be his and his alone.

A crude part of his Battousai self had just slipped through the cracks. He shook his head, trying to sober himself back up. He mustn't allow such a thing. Losing himself to his former possessive, manslayer self was what got him in so much trouble in the first place.

Since drinks were scattered across the table, there was little space for Kaoru and Misao to hold their impromptu arms wrestling match. So instead someone threw a pillow between them and the party goers made room to allow the two to lay down. Their hands were now tightly clasped together with elbows cushioned atop the soft pillow.

The pair started pushing with all their might. It had been interesting at first as everyone wondered how the match would play out. No one in the room was used to this sort of entertainment by women. Typically at parties, women were more soft-spoken blending into the background, more akin to paintings, while men rowdily enjoyed the night.

Not to say that Kaoru’s visage wasn’t breathtaking. Kenshin could not help but roam his eyes over her luscious curves, greedily drinking in her lithe form. Kaoru was a perfect combination of lean muscle and soft curves. A heavenly paradox that she was.

Closing in on the climax of this contest, Kaoru bit down on her lip and dug her fingers into the tatami mats for purchase. The chord of her neck tightened, making her collar bone even more enticing. If Kenshin knew that Kaoru was more captivating than this contest, then every other male in the room tonight must have known it, too.

Kaoru was breathing hard now, her chest heaving. Her silky black locks beckoned Kenshin’s fingers to card themselves through her hair.

With all the shifting she had been doing against the rough floor, her bindings had begun to come a little… loose.  A small window of her cleavage had been revealed. The usual modest Kaoru would have screamed in terror and beat the memory out of everyone who got a look, but her drunk self did not notice.

Sanosuke quirked an eyebrow upwards as the men cheered even harder for Kaoru. “Whoa , I think the Lil Missy has grown up a lot.”

His eyes flashed yellow in warning. For the first time in his life, Kenshin used his god-like speed purely for his own selfishness. In the blink of an eye, he was across the room. He settled in front of the two girls and out a hand atop their own, pushing it down in favor of Misao.

“I think this match has gone far enough, that it has,” Kenshin said pleasantly, but there was a tightness in his voice. He had closed his eyes to spare everyone the dangerous, heated look.

The room was a mixture of cheers and boos at the conclusion of the match. The boos were of course directed towards Kenshin for blocking the view of the lovely Miss Kaoru from thirsty eyes.

“Kenshin?! What are you doing?!” Kaoru yelled, partially delirious from the sake as said man flipped her onto her back and slipped his arms under the curve of her back and knees.

“You’re looking a little feverish, Miss Kaoru. I thought it’d be best if you retired for a bit, that I did.”

Although she flailed with all her might, being so drunk had put her at an even bigger disadvantage. All the jostling around made her head feel like jelly during an earthquake, so she eventually ceded.

“Mou, Kenshin. Guess I lost this round, too.” And with her defeat, she curled deeper into the red headed man’s embrace.

Kenshin ignored all the wolf whistled he garnered as he carried Miss Kaoru out of the party room and back upstairs where their bedrooms were. No, all he could focus on was the black-haired woman’s heartbeat against his chest.

As the swordsman carried the girl upstairs, he was careful not to bump her head or limbs on the pillars. When Kaoru nestled her hot forehead against the cool skin of his neck, he almost forgot how to breathe. The ghost of her breath fanned against his collar bones and he knew right then and there, Kaoru would be the death of him one day if he didn’t finish sorting out his feelings for her.

At the start of his journey to Kyoto, he erroneously thought that Kaoru would be his greatest weakness. That was why he truly thought it’d be in their best interest to separate. He now understood the saying “distance makes the heart grow fond.”

But as he set down the now slumbering Kaoru, he knew that his heart did not beat with simple fondness as he gazed upon her beautiful face. It was a smoldering yearning and something so raw and passionate that even he did not have the courage to face. But one day he will.

For now, he understood that Kaoru was indeed his greatest strength. And he hoped that one day, he might be hers well.

Kenshin left her bindings untouched since he had no idea how to fasten them. A small part of him feared that he wouldn’t be able to stop once he started unraveling them. He maneuvered her arms back into her gi, so she would not catch a cold and tucked her in nice and warm.

Since Kenshin did not wish for everyone at the Aoiya to think of them doing improper things, he knew he should part with her soon. But just as he rose to leave, he felt a tugging at his sleeve.

“Kenshin… don’t go…” Kaoru pleaded, just like the night lit only by fireflies. Kenshin’s heart ached and the self control he’d honed as a warrior crumbled under the weight of her soft gaze.

“I will stay with you Kaoru, that I will.” Kenshin, despite all propriety, slipped into the futon with her, relishing in the way she tightly clung to him. He allowed his battleworn self to rest within her loving warmth.

With the moon as his only witness, he placed a soft kiss upon her lips.

I stayed up til 4am these past coupla nights just binging Rurouni Kenshin manga, anime, and fanfiction. And of course, this is what comes out of it.

—-
I’m dying to chat about this ship to anyone who still loves it as much as I do! Reach out to me on Twitter @luckystars1015 if you do too!