Aziraphale discovers two drawings. This happens sometime after 1499; he may have found them in 1500, 2024, this afternoon, or at any time in between. Perhaps he discovered them amongst Crowley’s possessions, or they were hidden within the binding of a large rare folio he has recently won at auction. Adam or Anathema might have phoned him to tell him that social media is buzzing about two possible new Da Vinci drawings, and that they both appear to be of Crowley....when, where and how Aziraphale discovers them is up to you, as is the answer to the question:was Crowley Da Vinci’s demon?

(See the end of the work for notes and other works inspired by this one.)

Aziraphale finds two drawings. This happens sometime after 1499; he may have found them in 1500, 2024, this afternoon, or at any time in between. Perhaps he discovered them amongst Crowley’s possessions, or they were hidden within the binding of a large rare folio he has recently won at auction. Adam or Anathema might have phoned him to tell him that social media is buzzing about two possible new Da Vinci drawings, and that they both appear to be of Crowley....when, where and how Aziraphale discovers them is up to you, as is the answer to the question: was Crowley Da Vinci’s demon? 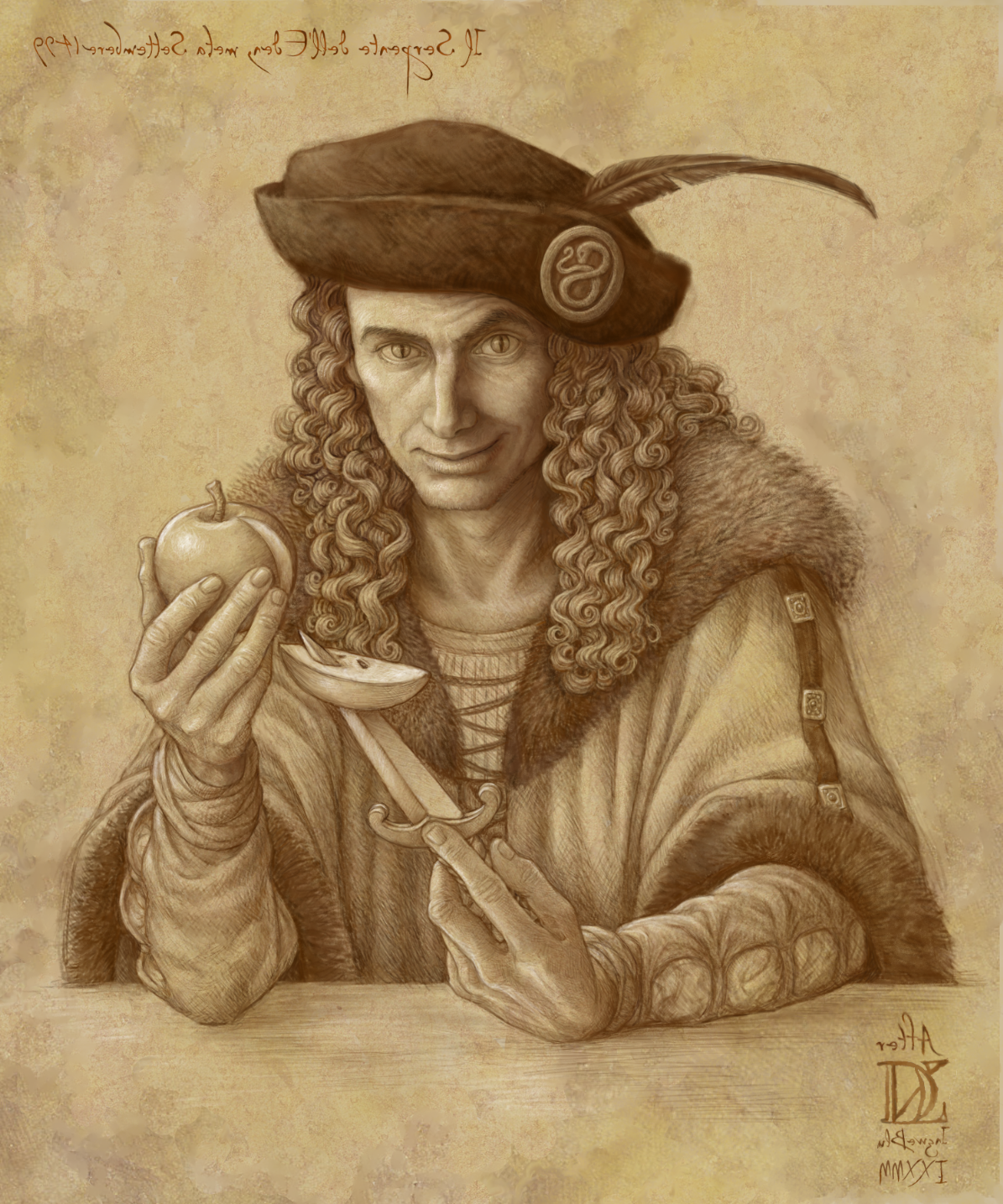 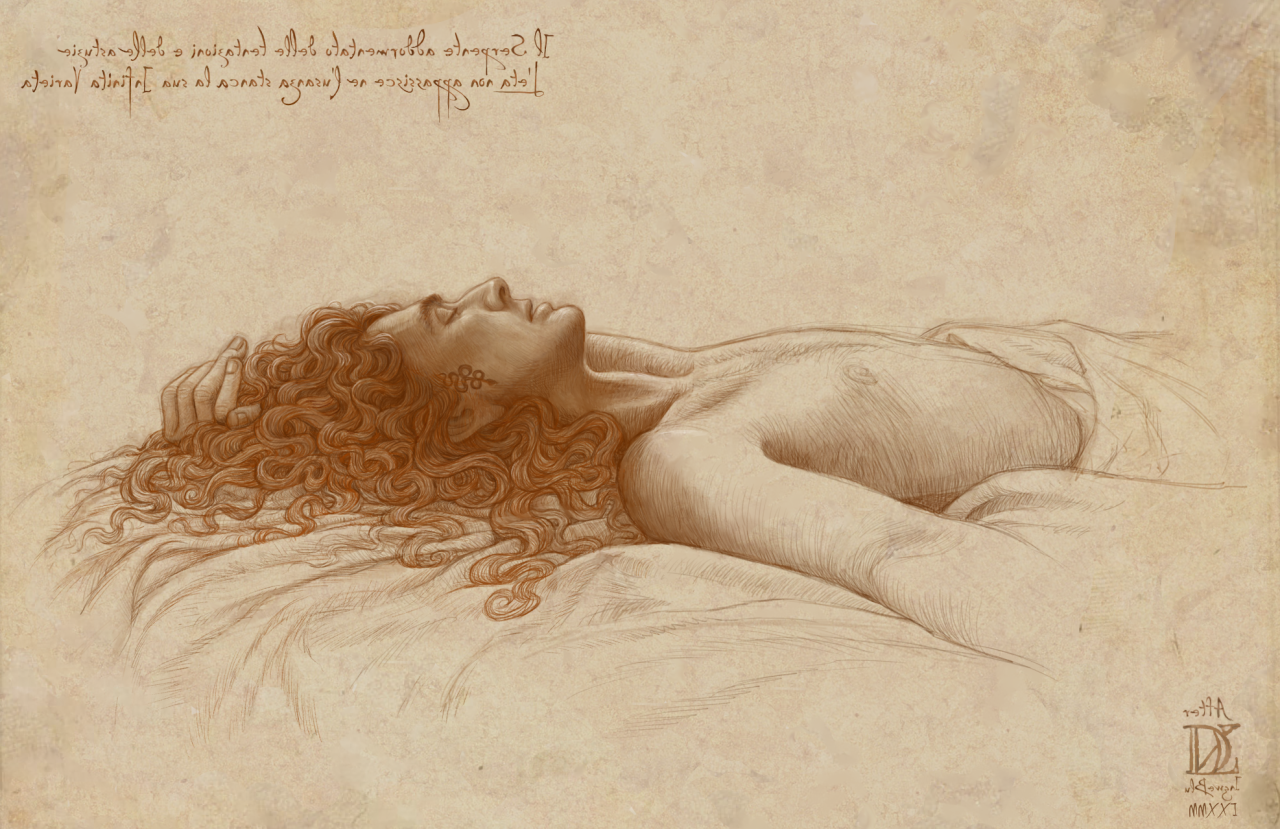 I’m including a less oxidized version of the portrait study. Oxidation can indicate a difference in age, or that the drawings were stored in very different locations or under different environmental conditions. The preliminary sketch for the Mona Lisa in Crowley’s study would have likely been handed to him directly by the artist, then preserved with miracles. 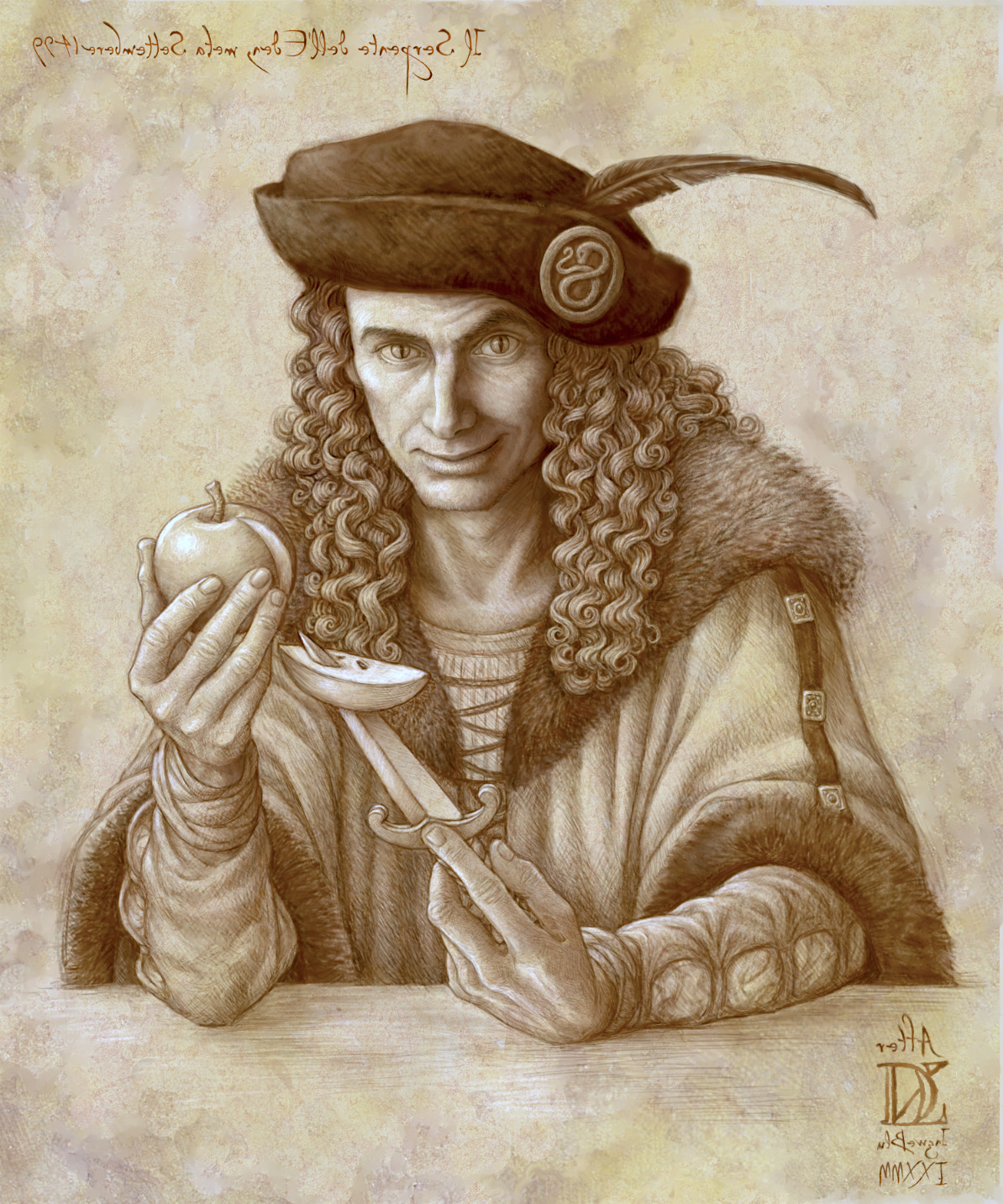 It was very rare for Leonardo Da Vinci to finish any of his drawings or paintings, and these two are no exception. The first is obviously a study for a commissioned formal portrait, very typical for the time. Crowley’s clothing would have been black, grey and wine red with accents in silver or gold. He was probably wearing an ostentatious bejeweled gold necklace, draped across his fur collar. But Leonardo never cared much for bling in his portraiture, and the values of the costume were never filled in beyond the hat and fur accents.

Da Vinci adored drawing curls and wavy hair (he would have dearly loved to have done Aziraphale’s portrait, I’m sure)! For all the hidden symbolism attributed to him, Leonardo did, in fact, enjoy bringing the hammer of heavy handedness down fairly frequently by having the subject pointing directly towards it. He was rarely happy with the hand gestures he chose, often changing them multiple times over the years on the same study or painting. He almost never came close to the level of perfection he expected from himself in his own work. This, along with his well known attention deficit disorder, likely accounts for the incomplete status of the vast majority of his creations.

1499 was a pivotal year for Da Vinci. He had been employed by the Sforza family in Milan, where he met Machiavelli (also a friend of Crowley’s?) among other notable figures of the era. He had completed several of his most notable works for them by the time the French attacked the city. Both the family and Da Vinci were forced to flee in different directions, but not before the latter experience the effects of war up close. The experience saddled him with a lifetime of PTSD. Leonardo is thought to have returned to Florence with his assistant Salai (whom Leonardo referred to as “the Devil”) and the mathematician Luca Pacioli, though some historians argue that he may have spent some time in Venice first. This hazy area of history is yours to make of it what you will!

The second drawing is entirely informal. It’s subject sleeps so soundly that he may not be aware that the drawing even exists today. It’s undated (please ignore the present date under “After LDV”in the lower right; that’s there as a traditional professional courtesy), so it might have been done during the time that Crowley was sitting for the portrait study, or later, at any time prior to Leonardo’s death in 1519 at the age of 67. Crowley would have appeared to have been the same age as Leonardo in 1499; the notation in Da Vinci’s mirror handwriting suggests that the artist both knew what Crowley was, and that his “infinite variety” is undimmed by age (NOTE: if you would like customized handwriting for your fic, please let me know-still not sure of the best way to do that-and I’ll accommodate if possible).

The treatment of the fanciful waves of hair suggest that Leonardo continued to work on the drawing well after it’s subject had awoken and departed. Portions of the drawing are tighter and more resolved than the majority of his life sketches. What that implies is up to you.

But does such an intimate portrait mean that they were more to each other than acquaintances or friends?

Possibly, but not necessarily. Leonardo drew sleeping and relaxing animals frequently (he was an animal loving vegetarian who noted that he never wanted his body to become a graveyard for those of animals) and did life drawings of people in the streets. Given that drawing was about the only way to visually capture a moment in time pre-19th century, an artist would have felt compelled to draw just about any subject that he or she found nearby. So any rating; G, T, M or E, can apply here; the choice is yours.

Personal note: I’ve been a lurker here since last August, but this is my first time posting anything. Yes, I’m aware that there are artists out there who are far better at this than I, but I wanted to attempt to give back in some way anyhow. Though I’m a professional, I never get the opportunity to do this type of style for my clients (mostly film studios, or the various divisions of the corporation that I’ve been contracting for over the past few decades. Not gonna get too specific here). I only work in the styles that clients request of me, and this one is radically different than those. A humbling exercise. Here I’ve been recommending the practice of emulating old master’s styles to my graduate students for years, but haven’t done one myself since college. It was bloody well past time that I followed my own advice! Plus, I lost much of my eyesight in one eye two years ago, and the other is also somewhat compromised, so my confidence has been given a blow ever since. Stepping outside of our comfort zones always does us a bit of good, yes? Now it’s your turn!

Edited to add: the handwriting on the portrait study reads “The serpent of Eden; mid September 1499”, while that on the informal sketch says “The sleeping serpent of temptations and wiles.Age does not wither nor custom fade his infinite variety “. You are welcome to change or remove it to fit whatever narrative you create, to digitally add damage to the drawings, etc.  And, of course, you certainly can choose to use just one of them if you prefer. Just have fun with it!

I don’t know all the “dos and don’ts” of this site, so if I step outta line in any way, please let me know. Technically I haven’t been a true fan of much of anything since the 1980s (I hope that’ll change eventually). Been battling depression and a boatload of health issues since then, but I’m finally starting to win that battle thanks to some of you. That’s not hyperbole. I might write down the truly bizarre, surreal, I-would-never-have-believed-it-had-I-not-experienced-it story of how I came to be here and post it in the comments section, or as an edit, later on if anyone is interested. And if anyone else has experienced some intense synchronicities after viewing the series, I’d like to know about those if you wouldn’t mind sharing. At any rate, I experienced a shitton of them involving a lot of dead black snakes with golden eyes (one even in the shape of Crowley’s tattoo), meeting new unconnected people, all with the same surname (Crowley), being bombarded with fallen angel and demon imagery over the course of several months, and that was just the tip of the big ol’ iceberg of WTF freakiness which definitely didn’t belong in the life of a jaded, hardened skeptic. 2020 and 2021 have been surreal for all of us to be sure (a woo loving friend warned me that they would be back in 2019, and I’d scoffed at her then. Ha)! I was coming off a decade of various deaths and tragedies as it was, and present times thankfully aren’t as stressful as those events were, but the past eight months or so have far exceeded them in terms of near unprecedented baffling weirdness. All this may be a tad cryptic; suffice to say that the universe continues to surprise me. But I ‘spose in many ways that’s better than boring predictability, eh?

Thanks to Nnm, charlottemadison, and particularly Drawlight (he seems to have erased himself from the internet* even more thoroughly than I have, but somehow his fics found me anyway) among others- none of whom I’ve met- I’ve been able to make sense of most of it, and am finally dealing with some stuff that I refused to even look at previously.

Never think that what you create is of no real consequence, particularly when you’ve put your heart into it. Your work may have ripple effects beyond any that you’ll ever be made aware of. Never doubt that you are capable of profoundly impacting the life of a stranger, or many strangers, for that matter.

Here’s another chance to do just that. Go on then; tell us a story. :)

* I was told that Drawlight had vanished from the interwebs, but when I just added names to the “gift this work to” box, two options came up. I don’t know if either is the same Drawlight (who wrote titles like “Ad Astra” and “Salinity”) a proxy, or just someone using the same name. Apologies if I tagged someone else by mistake!

Works inspired by this one: