Post-restoration, Al struggles with the limitations of his body. A small gesture from Ed reminds him he's not in it alone.

Based on this fanart.

I can't believe I have the chance to write this fic - the art inspired so many emotions in me, and I had to put them down in some semblance of a story. So first of all: thank you Dee, for letting me write this lil fic of your beautiful picture! Everyone, go give her and her art some love: tumblr 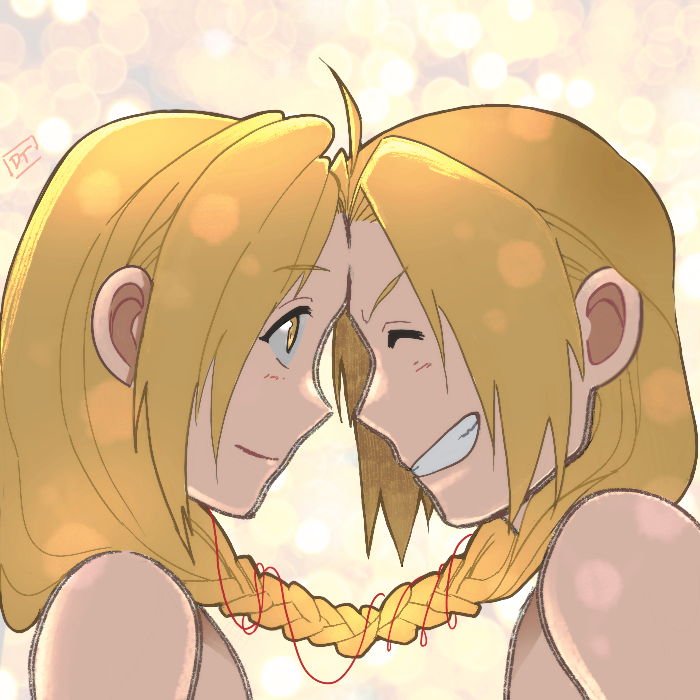 “Can I braid your hair?”

The question isn’t new to Al. Ed seems enthralled with every part of Al, since he’s returned. He loves running his fingers through Al’s long, ragged hair, and asks to braid it almost every day.

Al loves it, too. He loves the sensation, the feeling .

Privately, Al thinks Ed’s fascination stems from the number of comments their friends have made, about how much Al looks like Ed. Hardly anyone here in Central has ever seen Al before. Ed takes great pride in finally having a flesh-and-blood brother who resembles him.

This time, the request comes after Ed has caught Al punching his pillow, tears of frustration escaping unwanted down his cheeks.

Al’s confined to his bed, unable to even walk to the bathroom. He’s forgotten how much having a body hurts.

Granted, he’s been out of his skin for years, his mortal body abandoned on another plane of existence—so it’s reasonable for him to have more than his share of aches and pains now.

He struggles with the most basic of tasks. Standing, walking, eating, writing…all were impossible to him at first. Weeks of intensive hospital care and physical rehabilitation have brought him steps in the right direction, but he knows he has a long road ahead.

His body doesn’t have the decency to work right, even after all brother gave it.

Al tries not to let Ed see his frustration—Ed still insists on shouldering the blame for Al’s condition, as if he didn’t spend the last five years providing sleep and nutrition for this stupid, needy body. (Al sucked the life out of his brother. Without even realizing it.)

But sometimes it slips through. And all Ed can do is braid Al’s hair.

Al’s hair has never been this long. It’s a new sensation, feeling the soft tugs as Ed combs through it with his fingers and gently, deftly, weaves it into a plait to match his own.

Al closes his eyes, reveling in the closeness. The warmth. The smell of his brother.

If only he could have all the good parts of being human, without the painful parts. Without struggling to sit up. Without vomiting up everything he eats. Without his muscles shaking and spasming over every movement.

If only he could voice these complaints without seeing brother physically pile on more self-flagellation.

Ed tucks a stray strand behind Al’s ear. “Okay. Done.” There’s a hint of lightness in his voice, almost…mischief.

Al’s hands go to his hair. He runs his fingers over the braid, but he stops, confused.

Ed has somehow twisted his hair into Al’s, creating one continuous braid between their heads.

Ed grins, though pain still pools in his eyes behind the smile. “If you’re gonna be stuck in here, then so am I.”

Al tugs at the braid, which brother has somehow woven together without tying it off—and without using alchemy!—but it won’t budge. “Brother.”

He shouldn’t have to do this. He’s already given up so much. (Al’s taken so much from him.)

“Wait,” Ed says, ignoring Al’s protests. “Not done yet.” He leans to one side—pulling Al with him, of course—and digs something out of his pocket.

It takes Al a moment to realize what it is—so small and thin it’s almost invisible. But as Ed wraps it around their conjoined hair, it dawns on him.

“Is that from your coat?”

“Yeah.” Ed’s voice is quiet, tinged with not a little sadness. Almost grief.

He gave it to Mrs. Bradley, along with the tiny, sniveling body of Pride, after the Promised Day was over. He only kept a small piece of it, torn loose in all the fighting.

Given what he sacrificed to free Al, the loss seems appropriately symbolic.

Al’s throat tightens. The red string binds them together. Their past to their future.

It’s theirs , without a doubt. Al doesn’t want it without Ed.

“I love it.” Al scoots to face Ed, leaning his forehead on his brother’s. “Thank you.”

Ed grins again, his two flesh hands gripping Al’s with an intensity somewhere between elation and desperation. Maybe a little of both.

Al marvels at being held. At feeling it.

Someday, the storm of guilt and castigation between them will calm.

For now, Al revels in his brother’s warmth. His smell. His softness. In sharing a bed with him. Laughs at the thought of the nurses’ irritation when they discover not one patient, but two—tied together by blood, by love. And a red string.

Thank you for reading! As always, let me know what you think - comments feed my SOUL. I'm on tumblr too, hop over and say hi!