Remus hugged his winter cloak tighter to his body. It was early December, the middle of the night and it was bloody cold even though he and his friends were all huddled beneath James' invisibility cloak. Whatever was exciting his friends must have been distracting them from the icy chill in the late autumn night's air, because none of them seemed nearly as concerned as he was. All he had wanted was his bed, damn it.

"Where are we going?" He asked irritably for the fourth time. They were already far past the lake and headed towards the edge of the forest and the other three boys still refused to tell him what was going on. He stopped walking, causing the others to stop as well. "Guys, come on. I'm tired and I'm cold and I just-"

"Just a little further, Remus." Sirius looked up at him, grey eyes pleading even through the giddy anticipation they seemed to be holding. "Please?"

Remus' heart skipped. Damn Sirius. Damn Sirius and those eyes and damn himself for falling for it. "I..." He sighed. "You really can't tell me where we're going?"

"Just past the edge of the forest. We just need to be somewhere that no one can see us." James explained as they continued moving.

"Want my cloak?" Sirius offered without skipping a beat.

"Nah, I'm all hyped up on adrenaline." He smirked. "Besides, it's getting close to the full moon. Your immune system is utter shite." He shrugged out of his own heavy cloak and held it out. "Take it."

Remus hesitated for a second, a small smile tugging as his lips, and he took the offer, draping Sirius' cloak over his shoulders. "Thanks, Sirius."

Sirius eyed him up and down, his smile widening as they crossed over into the woods. "No problem." He winked. "I won't be needing it."

Remus was about to question what he meant by that when James ripped the invisibility cloak off of them and he and Peter removed their own winter layers, piling them on the ground and taking a few steps ahead of him.

With his three friends facing him, all wearing matching expressions of excitement and pride, Remus had never felt more confused in his life.

Sirius spoke up first. "Remember when you thought we were hiding something from you? And I told you we were working on something that was going to help you?"

Remus' heart felt like it was going to beat right out of his chest. "Y-yes?"

"We did it." James said proudly.

Remus shook his head, his whole body was trembling and he was pretty sure it wasn't from the cold. "...did what?"

The other three boys have each other an affirmative nod and Remus held his breath, until slowly the shapes of his friends bodies all began to shift. He felt as though his eyes might pop out of his head as the boys in front of him were replaced with a rat, a stag and a large black dog.

He was dreaming. He must be dreaming, because this couldn't be real.

The stag and the rat changed back into James and Peter and they both stumbled for a moment, clearly not use to the sensations of changing back and forth just yet.

"We did it for you, Moony." James said, once he had regained his balance.

"So we could come with you during the full moon and you wouldn't be alone." Added Peter, actually taking a seat on the ground to stop his head from spinning.

The dog barked happily and bounded over to Remus, jumping up to put his paws on his shoulders and effectively knocking them both to the ground where he began to lick Remus' face sloppily. Remus couldn't help the half laugh, half sob that escaped him. The dog's form began to shift on top of him and instead he found himself pinned under a happily grinning Sirius Black.

"I promised you." Sirius said quietly. "I said I'd find a way so you wouldn't be alone."

He saw the tip of Sirius' tongue dart out to wet his lips. They were so close. He'd barely need to elevate his head at all to kiss those lips himself.

"Alright Sirius, you mutt. Let him breathe, will you?" James laughed, breaking the daze that Remus had slipped into and with that, Sirius rolled off him and stood, offering a hand to assist him as well, which Remus took.

He wiped at his eyes with the back of his hand. "You're all completely insane you know." He said tearfully. "This is mad! And illegal and...bloody brilliant." He shook his head. "I can't believe you lot did this for me..."

"Well, don't go getting ahead of yourself, Remus. This isn't totally about you. We all know Sirius was just itching for a way he could lick his own privates." James said teasingly, and the two of them began to wrestle each other to the ground.

Remus smiled at the two and took a seat beside Peter. "I don't deserve friends like you." He mumbled.

Peter laughed and shook his head, watching James and Sirius who were now chasing each other in animal form. "That's just silly, Remus. Of course you do."

"Who on earth would go to lengths like this to help a werewolf?" Said Remus, still in awe.

For once in his life, Remus couldn't sleep because he couldn't stop smiling.

The events of the night kept playing over in his head and he couldn't believe they had been real. His friends had worked tirelessly, learning highly advanced and dangerous magic and making the extra effort to keep it a surprise, all to help him.

Never in his life did he imagine something like this.

He had his concerns of course, he wasn't one hundred percent sure just how it would work out on the night of the full moon. But he would worry about that later. The point was, James, Peter and Sirius cared enough of about him to do the nearly impossible.

He was so lost in his ridiculously joyful thoughts, he didn't notice the curtains of his bed shuffling until suddenly there was a large black dog leaping up to join him.

"Sirius!" He laughed and scratched at the dog's head. "You'll get dog hair all over my sheets, mate."

The weight on the bed changed and the form of Sirius took the place of the dog. "Sorry." He grinned. "I just...I was too excited to sleep."

"Me too." Remus admit. After a moment of silence between them, Remus cleared his throat. "Sirius...really...I don't know how I could ever thank-"

"Don't be stupid." Sirius said sternly. "You don't have to do anything to thank us. We're you're friends."

Again there was silence. Remus wanted to say something, but he wasn't sure what.

"Still think we're too old to be climbing into bed with each other if I'm a dog?"

Remus snorted and rolled his eyes. "You don't have to be a dog to come to my bed, Sirius. I'm sorry I said that last year..."

Sirius smiled. "Good." He gave Remus a playful shove. "Move. You're all long and lanky now. There's no room."

Remus shifted over to allow his friend to lie down. "Sirius..."

"I'm going to give you the lamest fucking nickname." 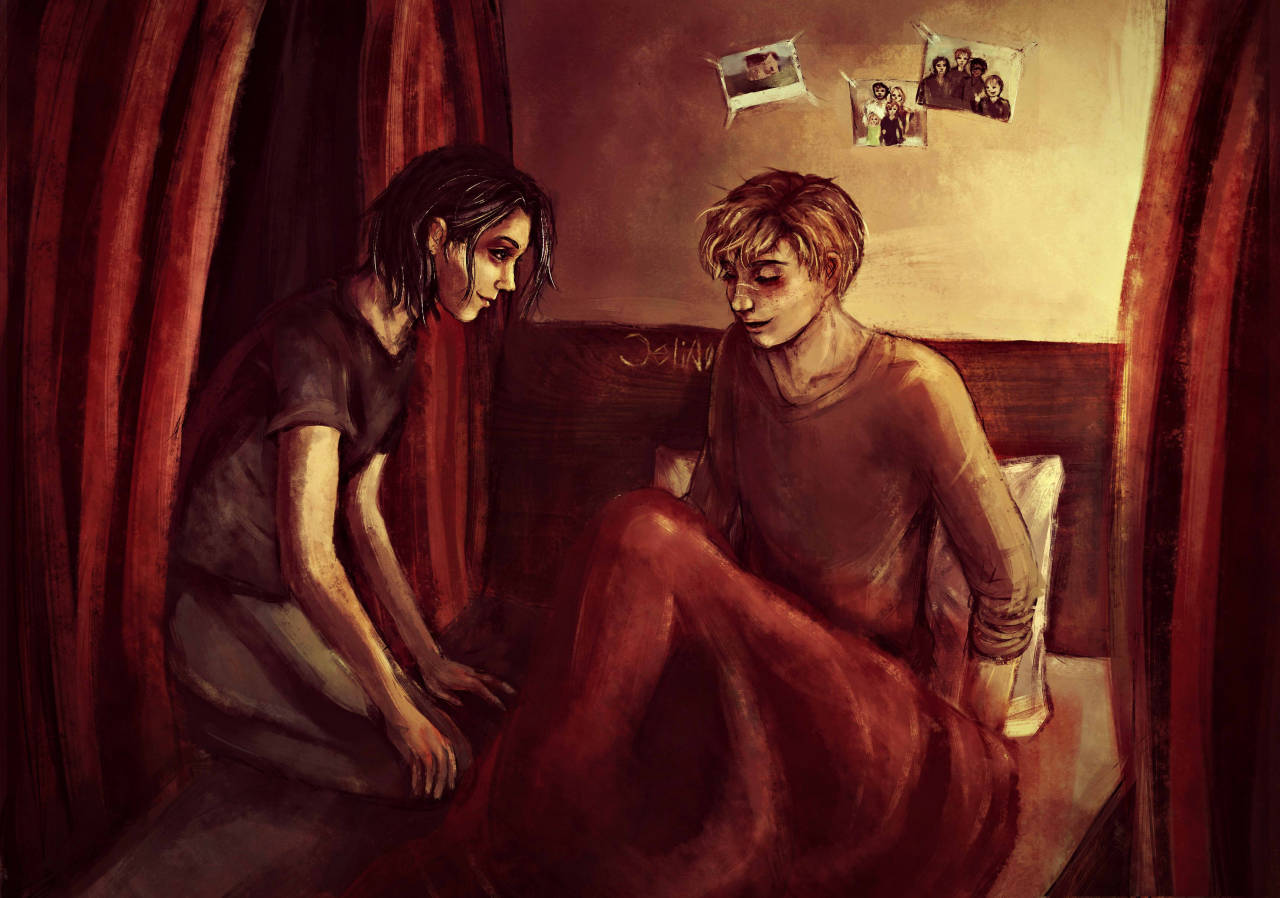